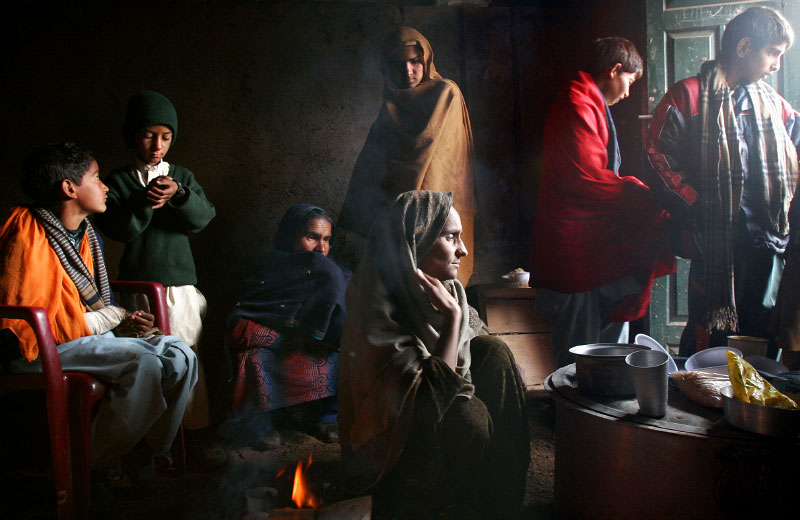 Hafeeza Zaheen, center front, keeps a small cooking fire burning in her livestock stable, where family members gather for warmth and community. The earthquake that claimed thousands also killed her youngest child, five-year-old daughter, Sultana, and her 9-year-old son Basit, second from the left, who suffers from tuberculosis, may not make it through the winter.

Thomas James Hurst grew up in Mill Valley, Calif. He first picked up a camera, an old Nikormat, at the age of 21 when he went to Bosnia in 1992. After returning to Bosnia a second time in 1993, he decided to study photojournalism at San Francisco State University.

During winter and summer breaks, he traveled to Haiti, Afghanistan and Rwanda and also interned at daily newspapers. His work has appeared in such publications as Time magazine, The New York Times and The Boston Globe.

In 1997, he worked as a staff photographer for The Boston Globe. Two years later, following his coverage of the war in Kosovo, he began working for The Seattle Times.

Thomas spent a month in Iraq in 2004 and in 2005 covered the devastating earthquake in the Kashmir region of Pakistan, earning him the Photograph of the Year award by Editor and Publisher magazine.

His work has been honored several times by World Press Photo, The Associated Press, the Society of Professional Journalists, and he was a finalist for the Pulitzer Prize for his contribution to The Seattle Times staff’s coverage of the WTO riots in 1999.